Looking for sentiment leadership for GBP?

Even before last Friday’s “flash crash” there were clear indications that the outlook for GBP had darkened over recent weeks. Crowd-sourced sentiment data tracked by Amareos showed that public fears towards the UK and the currency were rising. Indeed, in an article published just prior to the “flash crash” we concluded that,

“Crowd-sourced sentiment indicators not only suggest the risk to GBP remains skewed to the downside, but that the downside may be very significant indeed, even at these levels.”

To read the full article please click on the following link:

@ryan.shea emphasizes the nature-origin of the recent Cable wild ride. It is very different than the post-Brexit vote move (10%).
Amareos’s granular sentiment macro analysis, highlights the UK growth factor, as the main driver of the recent Mental Shift.

Do you agree with this sentiment driven analysis?
Are you opening new positions; which way?

thanks @ryan.shea - as I am on a trip to London right now I am loving the “London on sale” cheapness. It does look like GBP was on a slide before the Flash Crash and I have noted that Flash Crashes happen on down days.

This was not really like an equities flash crash (unusual order types which can be pulled at the last micro second generated by low latency machines). FX OTC relies on Market Makers who take risk. Regulators and Capital Adequacy concerns have killed that. So when a market is illiquid (outside of European working hours) and people head for the exits there is now no one on the other side of the trade. Back in the day someone with a Cuban cigar and a taste for fast women would have been trying to make money out of this, not now.

Eric Scott Hunsader of Nanex has an interesting post about this,although hes analyzing the futures contract,not spot. Even he thinks this wasn’t a case of traditional fat finger error- 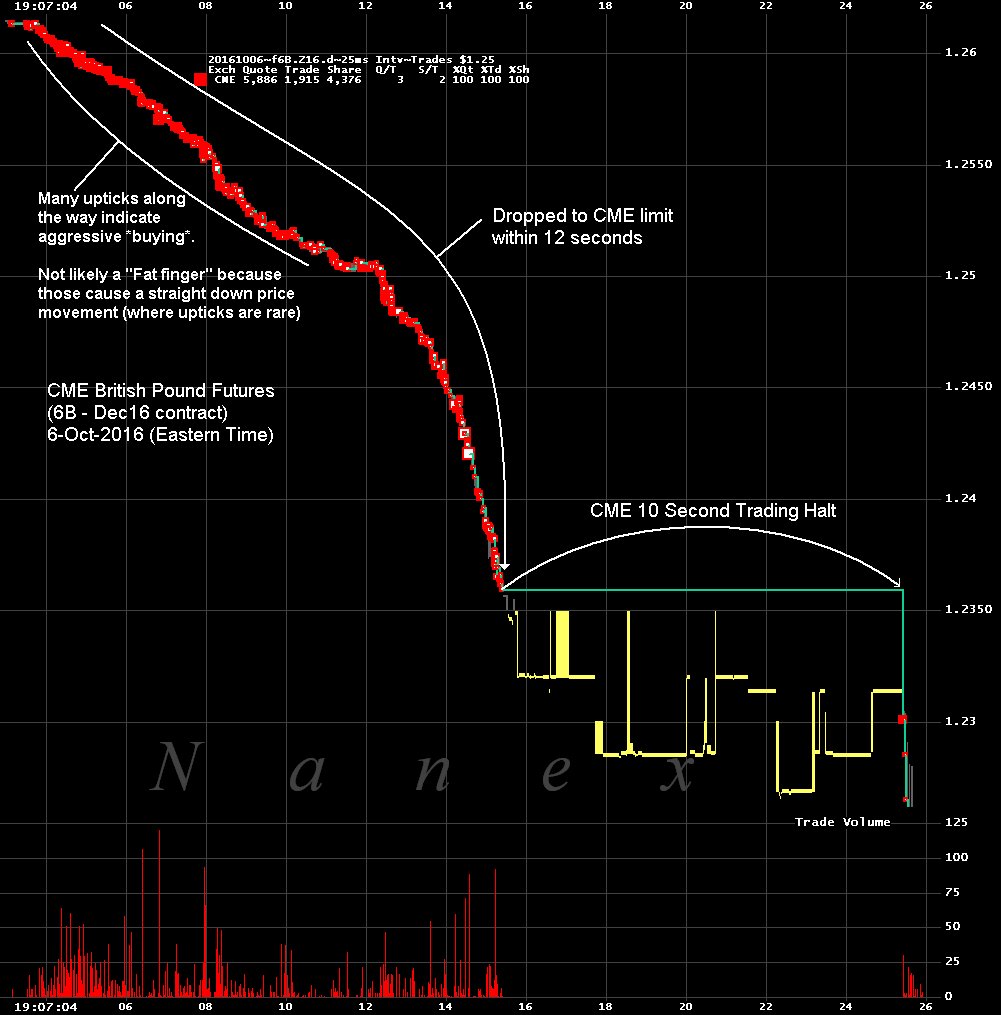 Thanks for the invite to the conversation, very interesting. From a news sentiment perspective, I have noted that a general uptick in news sentiment hasn’t led to a huge improvement in price. Conversly when sentiment started falling on cable in mid-September, price followed soon after. Indeed the levels of fear noted around cable rose considerably in the second half of September. Of most interest to me, is that long-term sentiment hasn’t fallen considerably recently, whilst after the BREXIT vote it did. This would suggest the recent sell-off is overdone, and due for a correction in my humble opinion.

Here are some simple charts I created from the Acuity Trading Sentiment tool-kit.

I have done a few videos and blogs over time on cable and Brexit, it’s an interesting topic. You can find my blogs and vlogs here. http://acuitytrading.com/blog/

We all need an update on the leadership sentiment for GBP!

As we can see from this chart, long-term sentiment towards Cable has been rising steadily since the end of October, with short-term opportunities created by rises in short-term sentiment. I would hypothesize that the market was expecting a bullish statement from the BOE, and as soon as the market started focusing on the up-coming BOE comments, talk about cable started improving. Conversely it could be suggested that cable improved on the back of improving Trump opinion polls.

K[quote=“legburger, post:6, topic:598”]
From a news sentiment perspective, I have noted that a general uptick in news sentiment hasn’t led to a huge improvement in price. Conversly when sentiment started falling on cable in mid-September, price followed soon after. Indeed the levels of fear noted around cable rose considerably in the second half of September. Of most interest to me, is that long-term sentiment hasn’t fallen considerably recently, whilst after the BREXIT vote it did.
[/quote]
@legburger interesting. Do you think down sentiment leads to down price but not vice versa? I am not active trader (value stocks, long term hold, is my poison) so looping in @marclussy for his view

Crowd sentiment towards GBP had fallen to its lowest levels since the Brexit vote following the flash crash. Even though the Article 50 ruling adds another layer of complexity, such an extreme sentiment skew (something we consider to be an important signal of crowd failure), combined with clear evidence of rising public conviction in the UK reflation story (as we outlined in last week’s Amareos Market Insight) supports a s/term GBP rebound. Obviously vs. the USD this week’s US election result will be a huge potential source of noise, especially as there is considerable evidence that the public is attaching a higher probability of a Trump victory than the pollsters are suggesting (again something we covered in last week’s publication).

Link to BIS study on what caused the flash crash

This report investigates the events surrounding the so-called flash event in sterling during early Asian trading hours on October 7. Drawing on granular high-frequency data, it includes a forensic study of the event window, a comparison with similar...

Executive Summary
This report presents an analysis of the 7 October ‘flash event’ during which sterling
depreciated by around 9% versus the dollar in early Asian trading, before quickly
retracing much of the move. It draws on detailed analysis conducted by the Bank of
England as well as intelligence gathered by the members of the BIS Markets
Committee.

This analysis points to a confluence of factors catalysing the move, rather than
to a single clear driver. Furthermore, it concludes that the time of day played a
significant role in increasing the sterling foreign exchange market’s vulnerability to
imbalances in order flow.

The event can be split into three distinct phases. First, the early phase of the
move, during which sterling depreciated rapidly from 1.26 to around 1.24 against the
dollar in response to significant selling flow, but in an orderly fashion and with broad
participation on key venues. Second, a period of a number of minutes of extreme
dysfunction during which sterling fell further, rebounded and then traded in a wide
range. This phase involved lower volumes and narrower participation, pointing to a
greater role for the actions of individual market participants as a driver of the sharp
moves. And finally, the gradual recovery in market liquidity over the hours that
followed.

A number of factors are likely to have contributed to and amplified this market
dysfunction. In particular, significant demand to sell sterling to hedge options
positions as the currency depreciated appears to have played an important role. The
execution of stop-loss orders and the closing-out of positions as the currency traded
through key levels may also have had an impact. A media report released shortly after
the move began, which would have been interpreted as somewhat sterling-negative,
is only likely to have added marginal weight to the move as it did not contain new
information. These factors appear to have contributed to the mechanical cessation of
trading on the futures exchange and the exhaustion of the limited liquidity on the
primary spot FX trading platform, which encouraged further withdrawal of liquidity
by providers reliant on data from those venues.

The presence, outside the currency’s core time zone, of staff less experienced in
trading sterling, with lower risk limits and risk appetite, and with less expertise in the
suitability of particular algorithms for the prevailing market conditions, appears to
have further amplified the movement. Other factors such as ‘fat finger’ errors and
potential market abuse cannot be ruled out, but there are little, if any, hard data to
substantiate them.

This event does not represent a new phenomenon but rather a new data point
in what appears to be a series of flash events occurring in a broader range of fast,
electronic markets than was previously the case in the post-crisis era, including those
markets whose size and liquidity used to provide some protection against such
events. There are a number of commonalities with previous flash events and similar
episodes. Unusually, there were few spillovers to other currencies or asset classes.
And no systemic financial institutions incurred material financial losses in this
instance. This might point to market participants having learnt lessons from past
episodes.

Flash events to date have generally proved short-lived and without immediate
consequences for financial stability. And the same appears to have been true of the
sterling event. However, such events have the potential to undermine confidence in
financial markets and hence impact the real economy. Therefore it is important for
policymakers to continue to develop a deeper understanding of modern market
structure and its associated vulnerabilities.